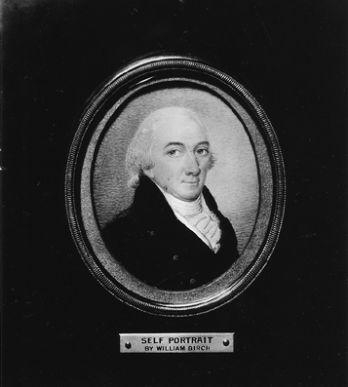 British-born William Birch was a pioneering figure in the visual representation of the United States. His landscape views and miniatures were key contributions to picturing the development of the early republic. He was also one of the few to gain prestige in a country that had not yet established the role of artists in society.

Birch was born in 1755, and raised in the rural area of Warwick, England. His father was a prominent physician and a patron of painter and etcher Thomas Worlidge. Birch was first apprenticed to a London jeweler before studying enamel painting with Henry Spicer. He exhibited work at the Society of Artists in 1775, and produced enamel miniatures of works by Sir Joshua Reynolds, Benjamin West, Thomas Gainsborough, and Jacob van Ruisdael. He received an award from the Royal Society of Arts for his technical achievements in 1784. In 1791 he published Delices de la Grande Bretagne, a collection of views of the British Isles that included three of his original compositions.

In 1794 Birch arrived in Philadelphia, and remained in residence there until his death in 1834. Gifted with a letter of introduction by Benjamin West, he became employed by prominent arts patron William Bingham. His engraving series Views of Philadelphia, published in 1800, was a major success and a milestone in depicting an American city. Using prominent sites such as the State House and the Bank of the United States, the series portrayed Philadelphia as a sophisticated seat of commerce and government. The first edition drew nearly two hundred subscribers, among them then-vice president Thomas Jefferson, foreign diplomats, merchants, and financiers. Three additional editions followed, and the engravings were included in city guidebooks of the day.

Birch went on to publish views of New York City and Mount Vernon, and joined in one of the first attempts to found an American art academy, the short-lived Columbianum. He was also known for his enamel and copper miniatures created from Gilbert Stuart’s portrait of George Washington. After Washington’s death in 1799, he reworked the image of High Street from Views of Philadelphia to depict the funeral procession, symbolizing the nation’s collective mourning. The Pennsylvania Academy of Fine Arts, the Artists’ Fund Society, the Maryland Historical Society of Baltimore, as well as the American Academy and Apollo Association in New York City exhibited his works.