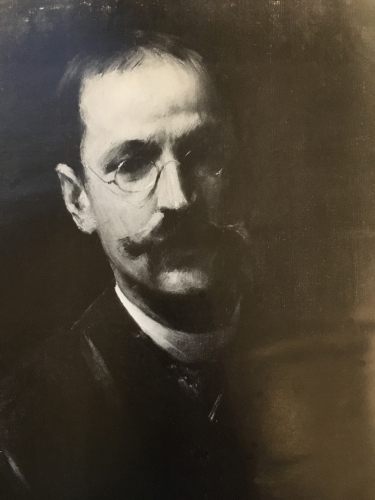 Influenced primarily by the regionalist principles of the Hudson River School, Walter Launt Palmer’s travels through the Catskill Mountains, Hudson River Valley, Paris, and Venice are reflected in his landscapes, as well as his domestic interiors and portraits. It is however the artist's winter scnes which brought him much aclaim throughout his career. Born into an artistic Albany, New York household Palmer grew up and interacted with many of the artistic luminaries of his time including Frederic E. Church, James and William Hart, George Boughton, Homer Dodge Martin, and Edward Gay. Palmer studied portrait painting with Charles Loring Elliot and landscape painting with Frederic Church in his early teens, and at the age of eighteen had his work accepted for a show at The National Academy of Design in New York.

In 1873 the Palmer family traveled to Europe and visited Scotland, France, Germany and Italy. While there Palmer studied with Charles Carolus Duran. During his time in Europe Palmer also spent time with many other artists including John Singer Sargent, William Merritt Chase, and Frank Druveneck. On his first visit to Venice Palmer was struck by the city’s natural and historical beauty and began painting its canals, churches, buildings, and interiors, subjects which he returned to often throughout his career.

At the age of 24 Palmer had become a protégé of Frederick Church, and ultimately shared a studio with him in New York city from 1878-1881. When Palmer and Church parted ways professionally, Palmer returned briefly to Europe and upon his return moved back to his native Albany. In 1890 he married Georgianna Myers, daughter of an Albany department store magnate, who unfortunately died in childbirth two years later. Palmer later married Zoe de Vautrin Wyndham.

A large number of Palmer’s canvases were painted from Palmer’s detailed notes, sketches, and photographs, which he compiled over time. He was extremely meticulous about keeping records of his works, a trait he and Frederick Church shared. While Palmer’s many Venetian scenes were in vogue among his clients and provided a steady income for the artist, he was equally if not better known for his luscious renditions of snowy woods and streams. The Metropolitan Museum of Art acquired his snowscape Silent Dawn. Many of his winter scenes earned him awards and prizes from various art clubs. Palmer attributed much of his success with winter snow scenes to painters John Ruskin and other Pre-Raphaelites who inspired his experimentation with blue shadows on traditional white snow. He was able to capture the variations of colors reflected in the winter landscapes around the Hudson River Valley. In 1908, the New York Times art critic covering Palmer's annual exhibition at the Noe Galleries in New York wrote,

Mr. Palmer is a devotee of the bleak and wintry season of
the year, when everything is snowed under, that is, except
Mr. Palmer's work, and all but one of these fourteen pictures
are snow scenes­-- the exception is a hot, turgid, sunny
Venice... as rosy red and warm as his snow pictures
are blue and blue, and Mr. Palmer is no less happy in both.[1]

Walter Launt Palmer lived in Albany from 1882 until April 16, 1932 when he died of pneumonia. The Walter Launt Palmer Collection now resides in the Library at the Albany Institute of History & Art and includes diaries and personal papers, photographs, and his studio books, which document the provenance of much of Palmer’s work.

Works by the artist may be found at the Metropolitan Museum of Art, Museum of Fine Arts Boston, Albany Institute of History and Art, and the Smithsonian American Art Museum.