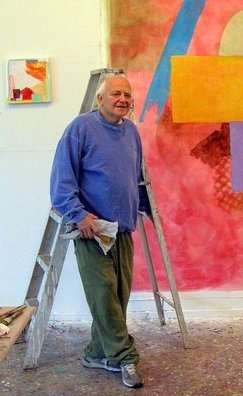 Robert Natkin was born in 1930 to a working class family in Chicago, and endured an emotionally tumultuous childhood. After fighting to pursue his interest in art, he attended the Art Institute of Chicago from 1948 to 1952. Here he was introduced to the growing trends in non-representational painting, and his interest in abstract expressionism was illuminated through the 1949 Life article on Jackson Pollock. He later spoke of the equalizing qualities that drew him to the style, and embraced its emphasis on self-expression.

Admiration for the abstract expressionists, in particular Willem de Kooning, first brought Natkin in New York City in 1952. He returned to Chicago within a year, and became a leading figure in the city’s group of abstract expressionists, associating with Ernest Dieringer, Judith Dolnick, Ronald Slowinski, and Gerald van de Wiele. Natkin and Dolnick married, and opened the Wells Street Gallery in 1957 as a venue for exhibiting works from this group.

In 1959 Natkin returned to New York City, where he found opportunities to exhibit at the Poindexter Gallery and to study the works of Old Masters at the Metropolitan Museum of Art. His work was included in the 1960 “Young America” exhibition at the Whitney Museum of American Art. He took up a residency at the Kalamazoo Arts Center in 1964, followed by a teaching engagement at the Pratt Institute.

Natkin made his first trip abroad in 1968, when his work appeared in the “Timeless Paintings from the USA” exhibition at the Galerie Paul Facchetti in Paris. In 1969 he was honored with a retrospective solo exhibition at the San Francisco Museum of Art, and an additional retrospection of his work was held at the Moore College of Art Gallery, Philadelphia in 1976. He eventually settled in Connecticut, where he died at the age of seventy-nine.

Natkin spent years working on different series of paintings, and much of his work was characterized by experimental textures. After working with mesh-like qualities, in 1971 he developed a technique of painting with rags and sponges. He believed in the therapeutic quality of art, and valued the emotional connection available through artistic efforts. In 1979 critic Peter Fuller later worked with the BBC to produce a documentary on Natkin that explored the relationship between art and psychoanalysis.​