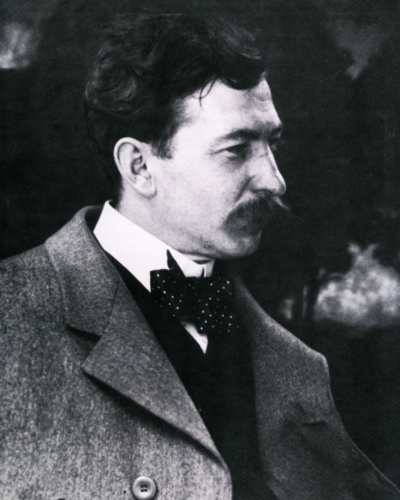 Miller was born in 1875 in St. Louis, Missouri. He first studied at the St. Louis School of Fine Art for five years, and worked as a staff illustrator at the Saint Louis Post Dispatch. He received a grant to travel abroad to the Académie Julian in Paris in 1898, where he studied under Benjamin Constant and Jean-Paul Laurens. He was included in the Salon des Artistes Français in Paris in 1901, receiving a Gold Medal. His work was exhibited and received awards at the Pan-American Exposition in Buffalo, New York, in 1901, the St. Louis Exposition of 1904, and the Liège Exposition of 1905. In 1908, he was made a Chevalier of the Légion d'honneur.

While establishing his career in France, Miller taught at the Académie Colarossi and split his summers between teaching positions in Saint-Jean-du-Doigt and Giverny. In Giverny, he socialized with Frederick Frieseke and Claude Monet. Alongside Frieseke, he was associated with expat painters Alson Clark, John Frost, Lawton Parker, and Guy Rose. Together, the artists exhibited at the Madison Gallery, New York, in 1910. They were critically praised and became known at the Giverny Group.

With the outbreak of World War I, Miller returned to the United States. His career continued to thrive, with showings at the Pennsylvania Academy of Fine Arts, the Art Institute of Chicago, the Panama-Pacific International Exposition, the Allied Artists Exhibition, and the Brooklyn Museum. He was elected as an Academician at the National Academy of Design in 1915.

Miller was drawn out to Pasadena, California, by Guy Rose, who taught at the Stickney Memorial School of Art. Impressionism was beginning to flourish in Southern California, and Miller was welcomed as a delegate of modern French American painting. He ultimately settled in Provincetown, Massachusetts, and was active in the art colony there until his death in 1943. With a leading role in the Provincetown Art Association, he was pivotal in developing the reputation of the famed arts community, which attracted luminaries such as Childe Hassam and Max Bohm.