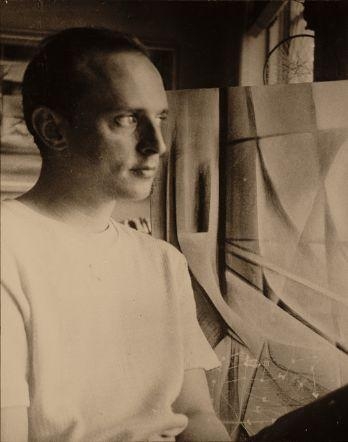 Born in Cologne, Germany, to art historian and journalist Louise Straus-Ernst and prominent Dada and Surrealist artist Max Ernst, Jimmy Ernst was in his early years intrigued by the art world but turned firmly against an artistic profession out of resentment for his father.  His parents separated early in Jimmy’s childhood, and Max left his son for a new life in Paris. In adolescence Jimmy visited his father and new wife, who entertained key artistic figures such as Alberto Giacometti, Man Ray, Victor Brauner, Joan Miró, André Masson, René Clair, Yves Tanguy, Salvador Dalí, and Louis Buñel. Ernst was privy to an exclusive screening of Buñel’s film L’Âge d’Or, and his father provided his first exposure to American jazz. In Cologne, Ernst had taken great interest in Gothic architecture and the stained glass of local churches, and was taught by his mother about Matthias Grünewald’s 1515 Isenheim Altarpiece. During his time in Paris, curiosity for the work of his father awoke, and he began to closely observe him at work in his studio.

With the rise of the Nazi regime, Louise Straus-Ernst faced investigation as a Jew and well-known intellectual, and she soon relocated to Paris for work. Jimmy began an apprenticeship in typography with the J.J. Augustin printing firm in Glückstadt while attending the Altona School of Arts and Crafts. His instruction in school, however, remained confined to mechanical work such as typesetting. Two years later, his artistic revelation occurred when he encountered Picasso’s Guernica at the Paris World Exposition. Ernst later recalled, “Suddenly, I was not at all certain that painting did not have the potential of transforming an external event or idea into attestation of one human being’s universality.” [1] Together with the Grünewald altarpiece that influenced Picasso, Guernica inspired Ernst with the communicative powers of art, and he resolved to become an artist himself.

In 1938 Ernst departed Germany one week prior to Kristallnacht. He arrived in New York on June 9th and entered the care of his sponsor J.J. Augustin, who briefly employed him in his publishing company’s New York branch. While working menial jobs, Ernst explored his interest in modern art and became a frequent visitor at Julien Levy’s gallery at 15 East Fifty-seventh Street, where Max Ernst and many in his circle exhibited. His acquaintance with Levy soon helped him into a job at the Museum of Modern Art’s Film Library. Once again immersed in the world of the avant-gardes, he associated with artists such as Carl Holty and Joseph Cornell and became reacquainted with Surrealist and modernist émigrés. As Ernst worked to secure travel to America for his parents, he began to produce paintings using leftover mailroom cardboard and poster paints, moving next to oils and prints made from linoleum tile.

Max Ernst arrived in New York in 1941 accompanied by Peggy Guggenheim, who he later married to avoid deportation. Jimmy took up a position as Guggenheim’s secretary-assistant, responsible for keeping track of her art collection. A year later, he was appointed director of Guggenheim’s newly opened Art of This Century Gallery. Ernst moved on to open the Norlyst Gallery in New York City in partnership with art dealer and painter Elenore Lust, using the space to host his first solo exhibition. His artwork at this time was heavily influenced by Surrealism, but Ernst took special interest in the unorthodox directions of Roberto Matta, Arshile Gorky, William Baziotes, and others. Ernst found these artists to be heavily motivated by an interest in gesture and the act of painting, rather than the theoretical discussions that preoccupied the older generation of Surrealists. He developed a close friendship with Baziotes, and spent time in Matta’s studio studying automatism along with young and experimenting painters such as Jackson Pollock. Ernst’s love of jazz music also bound him to this younger generation of artists, and he eventually produced works that for him explored the connections between music and painting through the inspiration of players such as Montana Taylor.

In 1945 Ernst learned of the death of his mother, who had been transported from a detention camp near Paris to the Auschwitz concentration camp in the summer of 1944. After receiving the news Ernst traveled to Amagansett, New York, where his father was living among other Surrealists. He moved with Max and his mistress Dorothea Tanning to Sedona, Arizona, and in the following year married Warner Brothers talent scout Edith Dallas Bauman Brody. Ernst held a job at Warner Brothers as an assistant to the art director of advertising through 1951, but he remained heavily involved with the New York avant-garde scene. In 1950, he participated in the “Artists’ Sessions at Studio 35,” and joined the “Irascible Eighteen” in protest of the Metropolitan Museum of Art’s bias against abstraction. A balance of life, work, and art continued as Ernst took up teaching jobs at the Pratt Institute and Brooklyn College, completed various visiting artist positions, produced sculptures for television shows, published articles for College Art Journal and Art in America, and became a U.S. citizen and father of two.

Ernst returned to Germany in 1961 after receiving a prestigious John Simon Guggenheim Memorial Fellowship. He traveled throughout Europe and participated in the U.S. Department of State’s Cultural Exchange Program in the Soviet Union. In 1967, he received an Andrew Carnegie Foundation grant for a study and report on “Freedom of Expression in the Arts, ” completed for UNESCO. Ernst continued to paint and exhibit widely, and in 1983 became a member of the American Academy and Institute of Arts and Letters, New York. His autobiography, which detailed his early years and relationship with his famous father, was published in 1984. That same year, on February 6th, he passed away in New York. Ernst’s lifelong investigation into the meaning and power of art produced dynamic and vigorous works, as captivating for their exultation of his influences as for their reflection of the extraordinary life of the artist.

Board of Trustees of Guild Hall, East Hampton, New York American Academy and Institute of Arts and Letters, New York

Works by the artist may be found at the Art Institute of Chicago, Harvard Art Museum, and the Smithsonian American Art Museum.