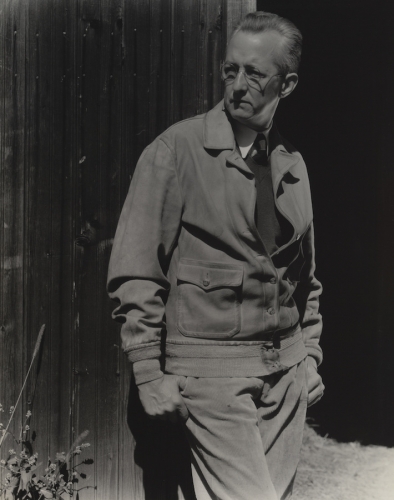 Charles Sheeler was born in Philadelphia in 1883. As a student he studied drawing and painting at the School of Industrial Art then attended the prestigious Pennsylvania Academy of Fine Arts. While at the Academy Sheeler studied under William Merritt Chase; the pair also traveled to Europe together. However, it was Sheeler’s extended trip to Europe with fellow Academy classmate and roommate, Morton Schamberg in 1908 and 1909 that catapulted Sheeler into the world of modern art. The techniques promoted by such revolutionary artists of the time such as Paul Cezanne and Marcel Duchamp were deeply influential on him. Upon learning that his favorite pupil had turned away from the traditions of Impressionism in order to pursue Cubism, Dadaism, and Fauvism, Chase ended their friendship. Ultimately it would be Sheeler's self-described Precisionist style that would characterize his aesthetic pragmatism.

Whether caught on film or expressed on canvas, sharply focused lines, abstract representations of space, and flat color palettes epitomized Sheeler's signature style. By 1912, in addition to relying on photography for a consistent income, Sheeler found that his experimentation in photography took his painting to new heights. By 1917, Sheeler had established himself as a unique and cutting-edge artist, counted among the ranks of Charles Demuth, Joseph Stella, Georgia O'Keeffe, and Louis Lozowick. His experience collaborating with Paul Strand on the motion picture Manhatta also greatly influenced his approach to visual composition in painting and photography.

Sheeler concentrated on rendering the impact of industry, and the utility of effective design. He embraced the principles of Pennsylvania Shaker cultural values and aestheticism, which were in keeping with his determination to achieve precision and simplification in his own artwork. He continued to paint and photograph until he suffered a debilitating stroke in 1959, after which, he only exhibited work. He passed away in 1965 at his home in Dobbs Ferry, New York.

Charles Sheeler played a major role in the development of modernism in America. His dedication to the principles of Precisionism in both his painting and photography provided new, alternative, and sometimes challenging perspectives of the fast-paced, always self-improving American Way.