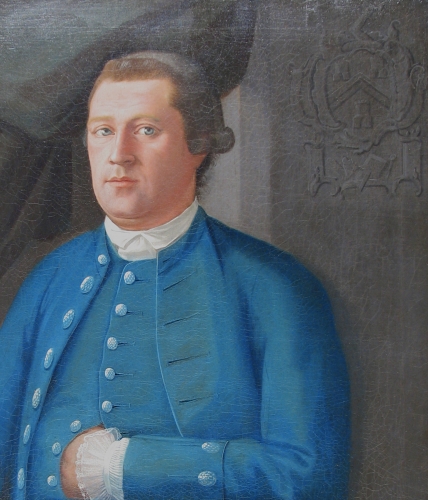 This remarkable self-portrait by John Mare would most likely have been done during the time when the American Colonies had a close association with England. As an ardent member of the Masonic order, Mare had originally included the Masonic symbol of the Premiere Grand Lodge of the Free Mason's Society in England in his painting. At that time lodges in the Colonies derived their charter from the Grand Lodges in England. When Mare, as a fervent patriot, wished to disassociate himself from England he elected to over-paint the Masonic symbol in his self-portrait.

Early in the 1960s, when this painting was acquired, there was no visible evidence of over-paint. At a later date the artwork was sent to a leading conservator for removal of the old varnish and cleaning. During this process the conservator uncovered the original Masonic coat of arms.

There is perhaps no other painting in America from the Revolutionary War period where an artist and patriot was able to demonstrate his commitment to American Independence by his action of obscuring the symbol of a former association with England.